Facts about Tawny Owls – including ecology, distribution and conservation. 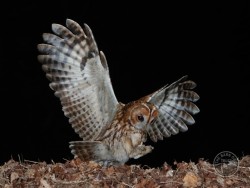 Tawny Owls (Strix aluco) are a resident, sedentary and highly territorial breeding species in the UK. They are responsible for the most commonly heard owl sound, the classic, nocturnal ‘twit twoo’ call, with which most people are familiar:

The home range is typically established in the late autumn, and defended throughout the winter until the spring when breeding commences. Vocalisations are common throughout this period, most often at night, although some calling can occasionally be heard in broad daylight.

The size of the territory ranges between 12 and 20 hectares (30 to 50 acres) depending on the amount of suitable habitat available. Typical lifespan is 4 years with breeding in the 2nd calendar year. Females are generally bigger and heavier than males.

Diet comprises predominantly small mammals, namely Wood Mice (Apodemus sylvaticus) and Bank Voles (Myodes glareolus), but can also include Field Voles (Microtus agrestis) if areas of prey-rich grassland are available within the territory. In addition they will take rabbits, moles, small birds, beetles, earthworms, frogs and even fish. They have been recorded eating carrion in times of hardship. 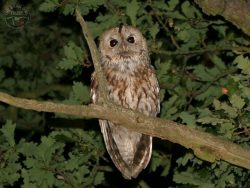 Tawny Owls are primarily a woodland species, but have adapted to live almost anywhere there are trees, including city parks, wooded urban and suburban gardens, farmland hedgerows and copses, as well as more extensive areas of woodland and forestry. The densest populations are found in deciduous, broad-leaved woodland, but they can also be found in coniferous forest and scrub habitats across both pastoral and arable landscapes.

Tawny Owls will nest in a variety of places but prefer tree cavities where available. However, in the absence of a suitable cavity they will use other natural sites including old crow or pigeon nests, squirrel drays, the forks of tree trunks, and even rabbit holes. They take readily to artificial sites such as purpose-built nestboxes. However, it’s highly unusual to find Tawny Owls roosting in a building and even rarer to find them nesting in one. 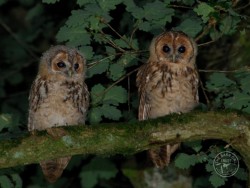 Only one clutch of eggs is laid, usually in the late winter or early spring. Average First Egg-laid Date is 23rd March in the UK although they can lay several weeks earlier than this if conditions are favourable, or a few weeks later if necessary. Clutch size is typically 2-3 eggs, laid asynchronously every 2 days or so, and incubation lasts for approximately 30 days. Fledging occurs around 5 weeks of age, although young Tawny Owls tend to leave the nest earlier than this during their ‘branching’ phase. Still dependent on their parents for food for up to 3 months after leaving the nest, they will sit around on the branches of nearby trees and beg for food once darkness falls. If you find a young owl on the ground it’s important to identify it as what you need to do will differ depending on the species. If it’s a young Tawny Owl then it probably isn’t in trouble and doesn’t need rescuing. If it’s a young Barn Owl the advice is completely different and it almost certainly does need rescuing and putting back in its nest. 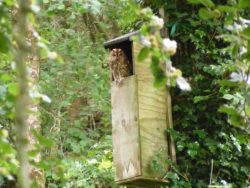 A word of caution if approaching or handling young Tawny Owls; the parents can be highly protective of their offspring – so head, face, and neck protection is recommended.

Tawnies are by far the most common owl species in the UK, with an estimated population of 50,000 pairs (2005). Nevertheless, they are amber-listed as a Species of Conservation Concern in the UK as a result of recent breeding and winter population and range declines (Eaton et al, 2015).

Widely distributed across much of Great Britain, they are absent only from islands (Isle of Man, Channel Islands, Northern and Western Isles, Scillies etc.), and uplands where there are few or no trees. As might be expected from a species unwilling or unable to undertake short sea crossings they are entirely absent from Ireland. 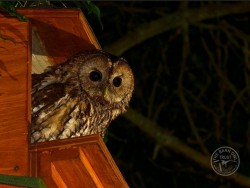 The reasons for the declines in breeding and winter populations and ranges are poorly understood. Changes in woodland management, increasing urbanisation and/or the influence of climate change on small mammal abundance could be factors, but more research is required. However, the following conservation measures could be of some help, not just for Tawny Owls but for a number of other species as well;