You are here: Home › Barn Owl facts and fun for kids › Owl jokes

Owl jokes – what a hoot!

Why do owls never go courting in the rain???
Because it’s too wet to woo!  🙂

What is a Barn Owl’s favourite subject at school?
Owlgebra!  😯

Two owls were playing pool. One owl said ” Two Hits”.
The other owl said “Two hits to who?”  😛

Two Barn Owls sitting on a perch and one says to the other:
“Can you smell fish?”  😆

What is the most common Owl in the UK?
A ‘TeatOwl’… everyone has a tea towel…! 😉

What do you call an owl with a sore throat?
A bird that doesn’t give a hoot!  🙂

What type of books do owls like to read?
Hooo-dunnits!  😮

What does an owl with attitude have?
A scowl!  😡

What’s the difference between an owl and an Irish funeral?
One’s awake in the night, the other’s a wake in the day!  😉

My friend the Tawny Owl told me he had just got engaged.
I hooted “You twit – to who…?”  🙂

What do you call a magical owl?
HOOOO-Dini! 🙂

Why did the Owl invite his friends over?
He didn’t want to be owl by himself.  😯

What do you call an owl that does boxing?
Muhammad OWLEE!  🙄

What do you call it when Barn Owls fight?
Clash of the Tytos!  😎

Send us your favourite funny owl jokes or owl cartoons and we’ll add the best ones to our Owl Jokes page for kids!

We screeched and hooted at these kids jokes and riddles….. but we need more!
Email your owl jokes or riddles to info@barnowltrust.org.uk
or send them to us at: The Barn Owl Trust, Waterleat, Ashburton, Devon TQ13 7HU.

Thanks to Teri  from Canada, Jake R, @rflynnic, Dave B, Andy from Leeds, Amelia, Lydia from Montreal in Canada, Dulcie, Caroline from Huntingdon, Tom from Essex, @wiseowldriving and @kittiwake70 for all your hilarious and/or groan-worthy contributions! 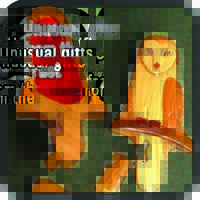