You are here: Home › HS2 – an extremely expensive way of killing Barn Owls
By botdavid on January 22, 2020 in Barn Owl Trust News

According to HS2’s own ‘experts’, if it’s allowed to go ahead, HS2 from London to Birmingham will “cause the loss of up to 80 breeding pairs of Barn Owls” – either through the demolition of nest sites or the very close proximity of trains killing the owls. 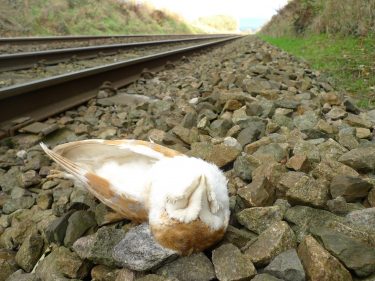 Barn Owls are not only beautiful. They’re a legally protected Schedule One species that was voted Britain’s most popular farmland bird in an RSPB poll

“We are extremely concerned” said David Ramsden MBE co-founder of the Barn Owl Trust, “not only for the 80 pairs nesting along the route but also for the high numbers of dispersing young that will be killed every autumn”. According to HS2, “once operational, there is a high potential for further significant adverse effect on breeding Barn Owls within 3 km of the route due to train strike. Route-wide, these losses will result in a permanent residual adverse effect which is significant at national level”.

Although HS2 say they are going to boost populations “about 3 km from the line” by 80 pairs, their Barn Owl Mitigation Plan has been declared not fit for purpose by all the independent advisory members of their own Barn Owl Action Group who wrote to HS2 withholding their support: all the Wildlife Trusts along the route – Warwickshire; Staffordshire; Bedfordshire, Cambridge, & Northamptonshire; Berks, Bucks & Oxon, plus the RSPB and the Barn Owl Trust.

“Their plans rely almost entirely on erecting wooden nest boxes on trees 3 km from the line” said Ramsden, “HS2 have refused to commit any funds to the recreation of the foraging habitat they intend to destroy and the nest boxes they intend to erect will only last 20 years compared to the 100-year lifespan of HS2. The idea that you can permanently increase an owl population elsewhere without permanently increasing the amount of foraging habitat is a complete non-starter. Furthermore, 3 km is not a safe distance”.

HS2 accept that 250 mph trains are going to kill Barn Owls every year but have refused to consider any form of monitoring, even by train-mounted cameras running owl recognition software.

According to members of HS2’s own Barn Owl Action Group, an appropriate Mitigation Plan should include the building of not less than 80 small stone owl towers, the creation of not less than 50 acres of permanent prey-rich rough grassland within 1.5 km of each tower. At least 50% of the overland route should be screened on both sides to prevent Barn Owls crossing the line at low level, and mortality should be monitored. Moreover, the mitigation measures must be as long-lived as HS2 itself.

Find more on the impacts of HS2 in this Report from The Wildlife Trusts:
What’s the Damage? Why HS2 will cost nature too much