Facts about Little Owls – including ecology, distribution and conservation. 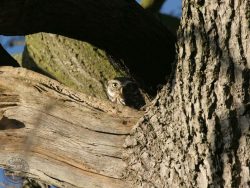 Little Owls (Athene noctua) are a highly sedentary species in the UK. They are particularly territorial in the breeding season and consequently very vocal, with a wide variety of vocalisations. Typical calls include a plaintive ‘kew’ ‘kew’ and a loud ‘wherrow’, repeated at regular intervals:

Little Owls establish their territory in the late winter and early spring, when males can be particularly noisy. Territory size varies throughout the year but is at its greatest prior to the breeding season when individuals may cover nearly 40Ha in the UK. This reduces to as little as 2Ha, as pairs provision young.

Diet consists primarily of crickets, grasshoppers and other invertebrates such as beetles and earthworms, as well as small mammals. Small birds are also taken during the breeding season.

Little Owls are most active at dawn and dusk, and after dark when most hunting occurs. However, they can frequently be seen during the middle of the day, basking in the sun on an exposed perch such as a telegraph pole, dead tree or isolated building. Rather than hunting on the wing, Little Owls usually hunt from a perch, typically a fence post. When prey is spotted they sometimes ‘bob up and down’ a few times before a typically short, low, undulating flight to the ground where they sometimes pursue prey on foot. Whilst perched on a post they blend into farmland environments extremely well and are easily overlooked.

If you’ve seen an owl and you’re not sure if it was a Little Owl check our owl identification guide.

They are found in a range of habitats but usually do best in areas of mixed farmland. They also seem to favour old orchards and other more open wooded areas, although they are not woodland birds. 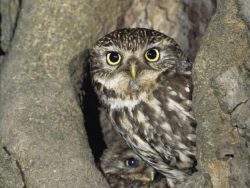 Little Owls are a cavity-nesting species, with nests recorded in rock crags, rabbit holes and haystacks as well as in buildings and tree holes. In the UK tree holes are by far the commonest natural site type. They will also readily take to man-made nestboxes. Little Owls are faithful to their nest sites and will return year after year, provided both of the pair survive. Between 3 and 5 eggs are normally laid towards the end of April, with incubation lasting about a month. Young fledge at 5-6 weeks of age but are dependent on the adults for a further 2-4 weeks thereafter.

Following their introduction in the late 1800s, successful spread and subsequent decline, we now have around 6,000 pairs of Little Owls in Britain.

A widespread and common species throughout Europe, eastwards through the Middle East to Central Asia, and as far south as North Africa, Little Owls were introduced into England in the 1800s. From there they quickly spread and by the 1920s could be found in Scotland and Wales.

Since then however, the species has experienced a decline in both range and population. They are absent from Ireland, and have disappeared from almost all of Scotland. Between 1995 and 2010 Little Owls declined by an estimated 40%, particularly in the western part of their range. They are now considered scarce in Wales and the western counties of Cheshire, Devon and Cornwall. 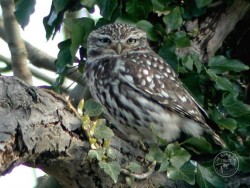 The reasons for the recent decline are unknown but the two most significant influences on nesting success appear to be food availability and prevailing weather conditions, particularly cold, wet weather. Other than tackling the causes of the Climate Crisis, not much can be done about the latter. However, creating prey-rich habitat is likely to be the most pragmatic conservation measure in areas where the species is still found;