Barn Owls are sometimes injured or killed as a result of flying into overhead wires and such deaths are bound to be under-recorded due to carcass loss by scavengers such as Foxes.

The risk may be greater for young, inexperienced Barn Owls in dispersal. Dispersing juveniles are unfamiliar with the landscape into which they are dispersing and it is at this time that most Barn Owl mortality occurs. Birds can also be killed by perching on the uninsulated 230-volt overhead cables sometimes found between buildings, such as this Tawny Owl (right): 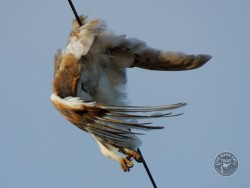 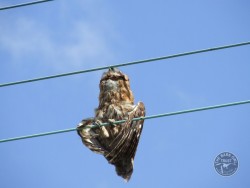 Can the risks associated with overhead power lines be reduced? 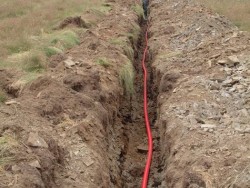 In deciding where to erect nestboxes and provide foraging habitat,  it is simply not possible to avoid the close proximity of overhead wires as virtually every farm has them. The ultimate solution is to have the cables buried, though this is not always practical or affordable. For example, in 2004 the cost of under-grounding an 11,000-volt overhead supply was £30 per metre. If you are commissioning new overhead cables you can at least ask the Electricity Distribution Company to ensure they are insulated. This is obviously more important where large birds such as owls are nesting nearby.

Reducing the risk of electrocution

Barn Owls, Tawny Owls and other birds are sometimes electrocuted. This often involves individual birds coming into contact with the uninsulated ‘droppers’ that connect each step-down transformer to the overhead 11,000 volt supply. It is possible to have the droppers insulated and those finding electrocuted birds under transformers should take photographs then contact their local Electricity Distribution Company to request this is done. 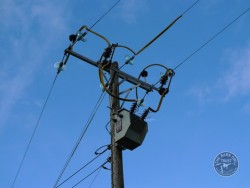