You are here: Home › Barn Owls and the law › Licences to disturb nesting Barn Owls 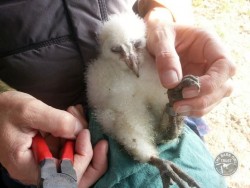 Anyone who intends to undertake an activity that is likely to result in the disturbance of nesting Barn Owls or their dependent young, or handle nesting Barn Owls, their eggs or young, should apply for a licence or permit well in advance. These are issued by the relevant country agencies.* Licences are location specific (site, county, region) and expire at the end of November each year. They are issued with the stipulation that licence holders must take all measures as appropriate to minimise disturbance. Licences are not normally issued for the removal or translocation of Barn Owls in order to facilitate development. Unlike bats (all species), Dormice (Muscardinus avellanarius), Great Crested Newts (Triturus cristatus), Smooth Snakes (Coronella austriaca) and many others, Barn Owls are not a European Protected Species (EPS). Therefore an EPS licence is not required.

Licence applications for the purpose of nest recording or bird ringing are made to the British Trust for Ornithology (BTO), which issues permits on behalf of the country agencies. All such licences and permits are generally referred to as ‘Schedule 1 licences’. A bird ringer’s licence to examine would permit the catching and processing of adults and young and the weighing and measuring of eggs if necessary. Processing usually involves weighing, measuring, age and sex determination and ringing. All nest inspections must be carried out as quickly and quietly as possible. Photographs of a nest may be taken without the need for a specific photography licence, provided that they are not the object of the exercise and do not prolong the visit.

Applying for a licence

Each licence identifies the activity it is issued for, such as ‘observe’, ‘examine’, or ‘take and possess’. Applicants need to provide two references from those who have first-hand knowledge of their work with the species and the methods for which the application is being made. Ideally, referees would have held a similar licence themselves within the last three years. At least one of the referees should preferably be from a different organisation from the applicant. A report must be submitted to the licensing body within two weeks of expiry of the licence, detailing exactly when and where the licence was used and what was observed. To renew a licence from the date it expires, a request must be sent at least three weeks prior to expiry with a report form completed to that date. Licensing authorities will not normally issue a licence until the previous year’s report has been received.

The need for a licence

Natural England advises that a licence will be required for anyone entering potential Barn Owl sites for the purpose of owl surveying, because disturbance is considered likely. Therefore, an ability to assess a site’s potential to accommodate Barn Owls is an important skill for surveyors. Surprisingly, Barn Owl licences are not necessarily required when surveying for other species (e.g. bats), unless there is information suggesting that disturbance to breeding Barn Owls may be caused. In light of the fact that the species has been recorded with eggs or dependent young in every month of the year, and that site status can change at short notice, it is wise for surveyors to obtain a licence, irrespective of the primary target species.

All Schedule 1 licences and permits clearly state that the holder is “expected to exercise the utmost care to avoid undue disturbance”. The most fundamental way in which disturbance during surveys is minimised is by choosing the search method that best suits the survey objective.

There are two ways of searching a potential Barn Owl site: bottom-up and top-down. A bottom-up survey starts with a search of the least likely place the owls will be nesting (typically the lowest building or hollow stump) and gradually progresses through the site, leaving the most likely place until last – very often the top part of the tallest building or the highest suitable tree cavity. Conversely, a top-down survey starts with a search of the most likely nesting place and works its way down to the least likely part of the site. It is imperative that the most appropriate search method is used.

What can be undertaken without a licence?

In determining whether or not a licence is needed, the proposed activity should be compared to the activities the birds are used to. For example, a licence is not required for quietly collecting owl pellets from the ground floor of a two-storey building that has Barn Owls nesting in the upper storey. However, it would be unwise to enter the upper storey, unless one knew for certain that the birds were already accustomed to this and there is evidence to suggest it has no effect on them. Any quiet short-duration activity that is confined to ground level is most unlikely to be disturbing.

Where Barn Owls are nesting in an elevated tree cavity, a licence would not be required for quietly picking up owl pellets around the base of the tree. The quiet use of the footpath that has always passed beside it would not require a licence, nor would the farmer doing his annual hay cut within a few metres of it. However, anyone climbing the tree, or leaning a ladder against it, would need a licence.

If in doubt, apply for a licence.