You are here: Home › Barn Owls and the law › Possession of dead owls, eggs and feathers 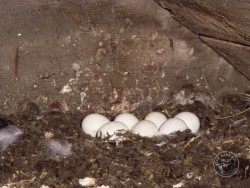 The Wildlife & Countryside Act 1981, Part 1, Section 1 (2) prohibits the possession or control of:

However, Part 1, Section 1 (3) states that no offence is committed as long as there is proof that:

Anyone who finds and keeps a dead Barn Owl, Barn Owl egg, or any part of the bird or egg, needs to know that the burden of proof falls on the holder. It is therefore important to keep a record of where, when and in what circumstances the specimen or item was found, in case such information ever becomes necessary to prove that an offence has not been committed. The subsequent sale of the specimen or item is illegal unless by a registered person. The legislation surrounding taxidermy and the keeping of dead wild Barn Owls, feathers or eggs and their subsequent sale or purchase, is complex and several licences may be required. Contacting the relevant country agency* is thoroughly recommended.

In 2008 the legal department of the Department for Environment, Food and Rural Affairs (Defra) advised the Barn Owl Trust that owl pellets are not considered to be ‘derived from’ birds and may be collected, kept, or traded without licence.

It is important to be aware of the increasingly high-tech approach to wildlife crime that has recently been adopted in the UK. X-rays are now being used to investigate cause of death in some specimens, including taxidermied ones. DNA sampling has been employed to prove the genetic heritage of birds in an attempt to cut down on offences involving wild birds being passed off as captive-bred. Be under no illusion, wildlife crime is still very much alive and well in the UK, in the 21st Century!