When do Barn Owls breed?

Barn Owls can breed in their first year. Although nesting has been recorded in every month of the year, most pairs lay eggs only in the spring. Prior to 1990, the average date for the first egg was May 9th. Since then the average date of the first egg has moved forward to April 17th, almost certainly as a result of climate change.

These are only averages however, and generally there is much annual and regional variation. Eggs in March are now quite frequent so the main breeding season is normally quoted as “March to August” (inclusive). Early laying females are generally those with the best food supply and first-year birds tend to breed a little later than older, more experienced birds. 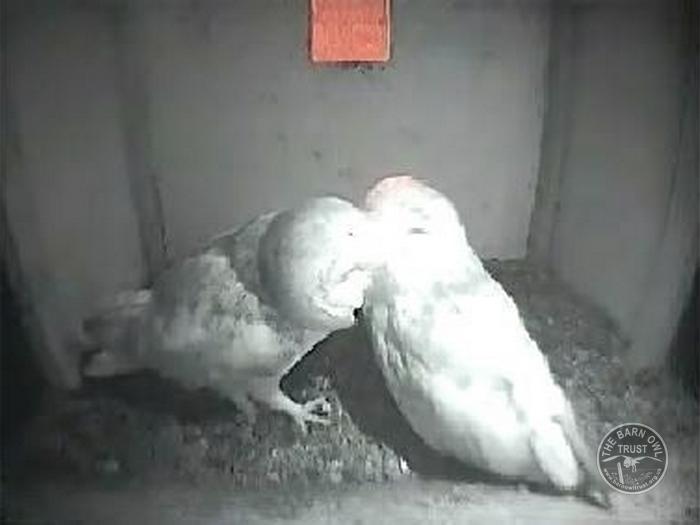 The breeding cycle often starts in late winter and by early spring pairs are usually spending much of their time at their intended nest place. Most pairs engage in mutual preening and cheek rubbing as part of courtship and pair-bonding.

The female does progressively less and less hunting, as the male brings food to her. Her weight increases from around 350g to 425g when she comes into what’s called “breeding condition”. Copulation generally occurs each time food is presented. In almost every case the male is present at the nest site in the two weeks leading up to egg laying and until the clutch is complete.

You can use our sexing Barn Owls photographic guide to help you identify male and female Barn Owls. 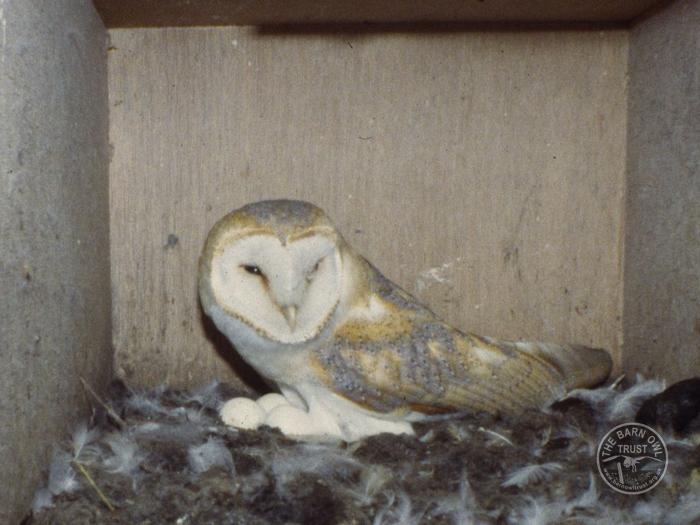 How many eggs do Barn Owls lay?

Typically 4-6 eggs are laid. The average is 4.7, and clutches laid earlier in the year are usually larger than later ones. Not all the eggs hatch though – 4 is the average – as some may be infertile. In cases where the eggs are abandoned, this is almost always because the female is underweight and/or suffering extreme food shortage. Compared with other owls of similar size, Barn Owls lay small eggs and lots of them. Pictures of Barn Owl nests and eggs.

How long before the eggs hatch? 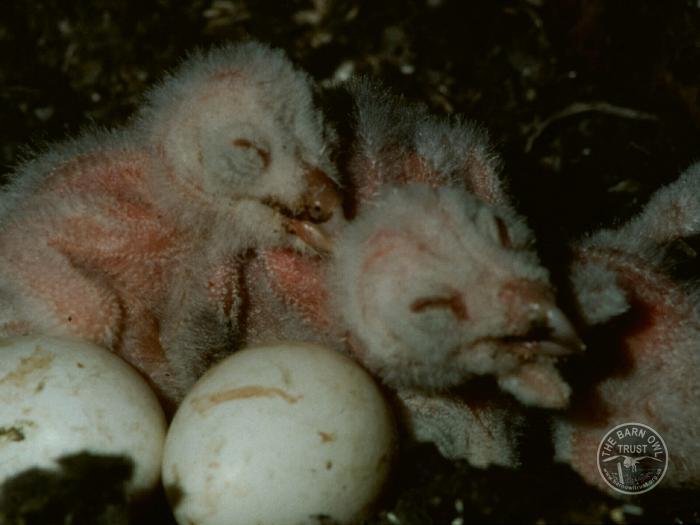 Most bird species don’t start to incubate (sit on and warm) their eggs until the clutch is complete, so the eggs hatch at more or less the same time. But Barn Owls begin incubation as soon as the first egg is laid and lay additional eggs over a period of around 8-21 days. After 31-32 days’ incubation, the eggs hatch every 2-3 days, usually in the order they were laid. This is termed “asynchronous” hatching. The age difference between the oldest and youngest nestlings can be as much as three weeks. This age variation serves to reduce the peak in food demand and spread it over a longer period. The female does all the incubation and the male provides all the food until the young are around 3 weeks old.  Read about the owlets and how they are reared.

Do Barn Owls build a nest?

Barn Owls do not “build” a nest as such but lay their eggs directly onto the previous years’ nest debris – a compacted layer of owl pellets.  The female might also make a scrape in the debris and break up a few recent pellets creating a soft layer for egg laying. Where there is no nest debris, the eggs may be laid on pellets that were produced while the owls were roosting or might be laid directly onto any surface (stone, wood, loft insulation etc.).

Do Barn Owls only nest once a year?

About 10% of pairs may breed twice in one year – although the proportion that does so varies tremendously from year to year. Records even exist of triple-brooding, although this is very rare indeed. Second clutches are normally laid in July, sometimes in the same nest cavity and sometimes before the first brood has left! However most second clutches are laid in an alternative nest place at the same site or nearby. 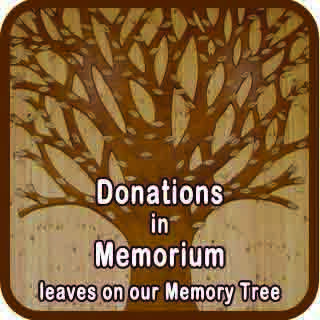