You are here: Home › Barn Owls and the law › Legal protection for nesting Barn Owls 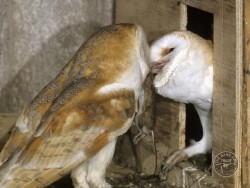 Barn Owls are included in Schedule 1 of the Wildlife & Countryside Act 1981 which affords them protection against disturbance whilst nesting in addition to the basic level of protection of Barn Owls afforded to most wild birds.

Specifically, under Part 1, Section 1 (5) it is an offence punishable with imprisonment for a period of up to 6 months to intentionally or recklessly:

When does protection for nesting Barn Owls begin?

Since Barn Owls do not build a nest in the traditional sense, their protection against disturbance is generally considered to commence as soon as the first egg is laid, although we consider that the shredding of pellets or the making of a shallow scrape in preparation for egg laying amount to nest building.

When does protection for nesting Barn Owls end?

Protection against disturbance only ends when the last young owl becomes independent (or dies). It is important to note that Barn Owl young continue to be dependent on their parents long after they have fledged. Typically they fledge at 8–10 weeks old and become independent at 11–14 weeks old, sometimes later. Whilst dependent, the young are legally protected against disturbance no matter where they are. Their temporary daytime roosts can easily be up to 500 metres from the nest and they are likely to venture even further within the period of dependency.

When is a Barn Owl ‘near’ its nest?

However, the extent of potential disturbance depends largely on the extent of deviation from the norm; a major building project involving large numbers of workmen, vehicles and machinery generating a great deal of noise 100 metres from a previously isolated, quiet nest site might potentially be disturbing, whereas a similar development the same distance from a Barn Owl nest in a busy farm complex might not be.

It is now much easier to bring prosecutions.  If you are aware of the risk that a nesting Barn Owl or its dependent young might be disturbed by something that you are about to do, and you carry on regardless, you will be guilty of a criminal offence.

Anyone who intends to undertake a legitimate activity that is likely to result in the disturbance of nesting Barn Owls or their dependent young, or handle nesting Barn Owls, their eggs or young, should apply for a licence from the relevant country agency. About Barn Owl licenses.

Some people take the view that Barn Owls are shy and easily stressed and that any disturbance will therefore cause them to abandon their nest or leave an area for good. Others consider them to be almost ‘bombproof’, taking no notice of people or machinery nearby, even when they are nesting. Such seemingly conflicting points of view can in fact both be regarded as correct – exactly what constitutes disturbance is highly variable.

Disturbance is not related to any particular activity. What disturbs Barn Owls is the unexpected. Normal, frequent and regular activity within the same building as an occupied nest may not be disturbing to the birds if they are used to it. Conversely, any unexpected, prolonged and/or noisy work within the building or close by may be extremely disturbing to the birds and pose a major threat to breeding success.

Causing a bird to fly repeatedly from its nest, or stay away when it would otherwise be incubating eggs or brooding young, would constitute disturbance, as would blocking or drastically changing a bird’s normal access into its nest. Flushing a recently fledged, dependent young Barn Owl from its roost and thereby forcing it to fly in daylight, or preventing its free access to its natal site, could also constitute disturbance.

Although there are a great many influences, there are two which mainly determine how an individual Barn Owl will react in terms of its continued site occupancy. These are:

Three additional factors can strongly influence how adult Barn Owls in their nest will react to disturbance and the chances of nest abandonment. These are:

Birds that have only recently occupied a site and have not yet become accustomed to nearby noises are more sensitive to disturbance than birds that have been there a long time and heard it all before. Nesting birds that are underweight in a low exposed nest are more sensitive to disturbance than birds in good condition, that are safely tucked away in a secure, elevated and enclosed nest cavity.

Sensitivity to disturbance also varies in relation to the bird’s annual cycle. During the early parts of the breeding cycle (courtship and pre-laying stage) sensitivity can be high. Sensitivity can remain high throughout egg laying, incubation and brooding, but generally reduces once the young are old enough to be left uncovered. However, even at this late stage, disturbance must be kept to a minimum, especially during the evening and at night, so the adults can repeatedly deliver food items to the nest.

Juvenile Barn Owls in post-fledging dispersal can also be sensitive to disturbance when trying out new daytime roost sites. This dispersal phase generally occurs from August to November, but because these young birds are by then independent, they have no legal protection against disturbance.

Where planning consent has been obtained, the contravention of wildlife legislation during the development phase is largely prevented by the requirement for pre-development wildlife surveys and the implementation of pro-biodiversity planning policies. In spite of this, things do occasionally go wrong and nestling birds are sometimes discovered during development. Tree felling operations, crown reduction, pollarding etc. can also cause disturbance to nesting birds and/or their dependent young; to proceed with development or tree work once an active nest is discovered would clearly be illegal.

Where the protection of breeding Barn Owls has called a temporary halt to the development, the delay will not normally exceed four months in total. Where development work awaits the completion of a breeding cycle, a nest inspection should be carried out by a licence holder before work is resumed. There may be some scope for phasing works at larger developments involving more than one structure though advice should always be sought from an ecological consultant. The potential for disturbance must be assessed, bearing in mind the stage of the nesting cycle, in combination with the location, nature and extent of any material evidence elsewhere, and the location, nature and extent of the actual works. Remember that the activity itself is not the disturbing factor to Barn Owls, but rather its unexpectedness.

The best precaution for minimising the likelihood of disturbing breeding Barn Owls is to avoid works commencing between 1st March and 31st August, as most breeding cycles fall within this period. At sites where works commence before 1st March it is still possible that the birds could move into the development site and start to nest in spite of all the noise and activity. However, it can be argued that, in doing so, the birds have demonstrated their tolerance of the development. In such cases the immediate nest area should be declared a no-go zone and the existing noise and activity levels should not be allowed to increase significantly.

A far better option is to make alternative provision for the birds, a minimum of 30 days before works are due to commence, in the hope that they will nest there instead. If there is any doubt about the status of Barn Owls at the site, it is advisable to adopt a precautionary approach, assume that birds are present and nesting and avoid doing anything that may constitute disturbance.

Thank you to Nigel Booth, barrister at St John’s Buildings Chambers in Manchester, for his assistance in the preparation of this page.