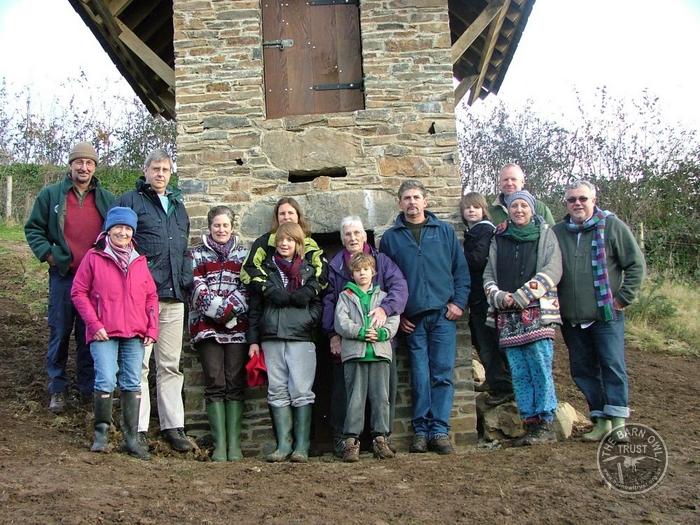 Back in December 2008 Friend of the Trust, John Woodland passed away. Before he died, John talked about making a donation to the Trust and loved the idea of his money being used to fund the Trust’s very own wildlife tower, like the one built for ‘Wild Thing I Love You’ back in 2006.

Two years down the line and the wildlife tower is now complete! A small ceremony was held this month to mark the 2nd anniversary of John’s death and to declare the tower open to local wildlife. The ceremony was attended by John’s family, three of the Barn Owl Trust Trustees and the Head of Conservation, David Ramsden.

The tower has separate nesting cavities for Barn Owls, Little Owls, Kestrels, Stock Doves and small birds such as Redstarts, Spotted Flycatchers, Robins and House Sparrows. It also has nursery and hibernation areas for bats, holes in the mortar for hibernating insects and stones at the base of the tower for reptiles and amphibians.

A local stonemason, Ashley Major, and his colleagues started work in July this year and managed to get the tower built before the winter weather set in. Our handywoman, Jasmin, then installed all the woodwork including the nestboxes, the locally sourced oak doors and timbers.

The tower is situated in a beautiful and peaceful spot, looking down over the wildlife ponds and the river Ashburn. We hope that it will be, as John wanted, a lasting home for local fauna.

In March 2013 we published this slideshow showing the building of our Wildlife Tower in North Park, part of the Barn Owl Trust’s Lennon Legacy Project.