Find out how we look after our Barn Owl habitat and share the monthly highs and lows of wildlife sightings, unpredictable weather and practical conservation work.
More about our Wildlife Diary.

If you would like to visit the LLP, please book on an event or wildlife walk. 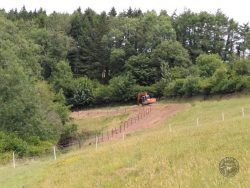 1st of June saw the contractor arrive to start work on a new fence line between North Park and Corner Wood. His first job was to create a path across the steep slope for management of the new woodland edge. Most of this work was finished in a week and he also moved some rocks at the pond abstraction point in the river to replace those that had been washed away when the river was in spate last winter.

The first two days of the month were blazing sunshine then on the 3rd some welcome rain arrived although so far probably not enough to give the parched grassland and crop the relief they need after such a dry Spring. We spoke too soon. By the 17th we’d had just one completely dry day and collected 61 mm of rain! This means that the crop is really starting to grow now and self-seeded Mallow, Slender Mullein and White Campion are flowering amongst it. 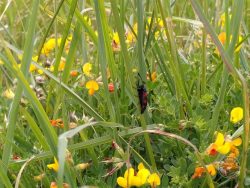 In the rough grass we are now seeing Birdsfoot Trefoil, Lesser Stitchwort and Germander Speedwell.

On the 9th an adult and a juvenile male Greater Spotted Woodpecker were seen together near the Ashburn in North Park.

A Kestrel was seen hovering over the field on 12th and 14th and then again on the 16th and 17th. The first sighting for sometime giving rise to the hope that they have returned to the valley to breed again.

On the 16th the contractor arrived to repair the hole in the outlet of the Oakley Pond. The water has been running underneath the artificial stream bed between the ponds since last summer.

Two female Roe Deer were seen on two separate occasions grazing on the top of the field on the 17th. Two fish were spotted in torchlight in the Flo Pond on 19th and on the 21st (Midsummer’s Day) the first Marbled White butterfly was seen on the edge of the crop. 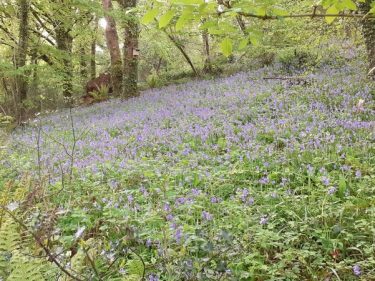 The Bluebells in Corner Wood are magnificent this year. Our usual patch of mixed white and blue Bluebells appeared again on the slope outside the wood. Unusually high numbers of Stock Doves have been seen regularly on the Crop area of the field 28 were counted on 2nd with a pair being seen around the Wildlife Tower for the first time. Stock Doves are an Amber Listed Species of conservation concern. On 9th May a pair of Skylark flew up from the ground. During the first two weeks of the month at  least 2 pairs of Meadow Pipits were being seen regularly. Early in the month two Brown Trout were seen in torchlight in the Flo Pond, this is the first time for several years we’ve seen fish. The pond water levels are very low at the moment due to a leak in the at the outfall of the Flo pond and because the abstraction from the river isn’t working at the moment. We’re hoping that both problems will be sorted before mid-summer.

The winter wild bird food crop is starting to grow but having to compete with a dense carpet of Buttercups.

The Flo Pond was visited by a pair of Mandarin Ducks on the  17th with the male being seen alone on the 20th. The following day  a pair of Mallards appeared and were seen for three consecutive days, probably feasting on the tadpoles,  in both ponds.

On the 18th May one of our non-furloughed staff, Mateo, worked with a volunteer (socially distancing) to erect a temporary electric fence and remove the posts and wire separating North Park from Corner Wood.  This is so we can allow the steep scrub area of North Park which is incredibly difficult to manage, to become woodland, thereby creating a larger carbon sink. We have a contractor coming to erect a new fence later this month and he can now reuse the wire. Mateo said; “It felt great taking down the fence and liberating the woodland which will allow it to spread”. 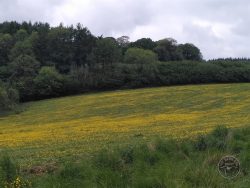 Buttercups on the winter bird food crop area May 2020 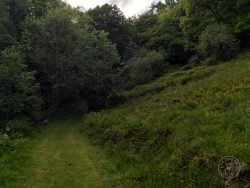 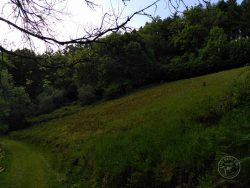 Looking up the slope by Corner Wood 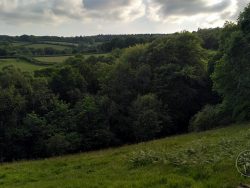 Looking down the slope by Corner Wood

The Met Office has announced that “It has been the sunniest Spring on record for the UK and all the home nations and the driest May on record in England”. Here we recorded just 12.2 mm of rain in the month over 5 days.Our highest temperature was 24.3° C – we did record higher slightly higher temperatures here in 2010,2012 and 2018 but the mean temperature was only higher in 2008 and 2018 and in both of those years we did have more rain. We ended the month with extremely dry soil and the short grass on the mown paths turning brown. 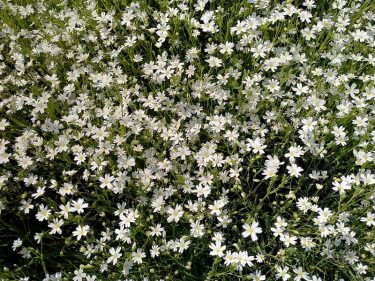 The month started with an overnight temperature below freezing on the 1st and then began to warm up reaching a high of 22° C during the day on the 11th. Plants and flowers responded to the warm temperatures and we saw the plum and cherry trees in the orchard in full blossom. Celandine’s and Violets joined the Primroses and huge patches of Greater Stitchwort appeared in the rough grass. By the second week of the month the Bluebells in Corner Wood were starting to flower. By the 18th the apple blossom was starting. Thirteen Orchids were counted on the 12th.

The Pond levels have dropped to the lowest level for sometime as the abstraction point in the river needs attention, but they are both teeming with large Tadpoles. The ducks that usually visit to feast on them have been noticeably absent this year but there have been regular sightings of the Heron.

By the 12th the large Linnet flocks seemed to have moved off. On the 16th contractors came and sowed the seeds for this years bird crop using a minimum tillage method for the first time, this helps to keep the carbon in the soil. It was just in time for the rain which arrived on the 17th. On the 19th a flock of 25 Linnets were seen flying over the newly seeded ground.

By the end of the month the Greater Stitchwort was in full flower and the patches in the rough grassland could be seen from the other side of the valley. The Early Purple Orchid patch boasted 33 flowering plants on the 26th.

The weekly Butterfly Transect restarted during the 2nd week of April. 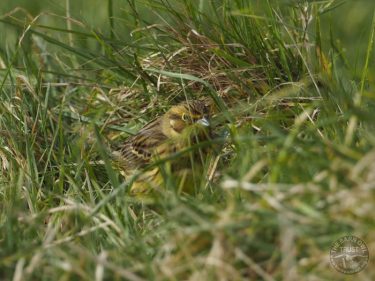 A Skylark came out of the grass at the top of the field and gave a burst of sub-song as it ascended on the 2nd. On the 3rd two Mistle Thrush were foraging in, and calling over, the top field whilst a Grey Wagtail was in song down towards the Ashburn.

The number of birds in the bird crop had started to drop off noticeably by the start of month so that by the 6th there were only about 100 Linnet and a handful of Chaffinch, despite there being seed still available. We can only assume the birds are already moving onto territory after such a mild winter. However, it was quality not quantity, when a first winter male Yellowhammer was seen foraging in the grass adjacent to the crop on the morning of the 6th. This constitutes only the third record for the LLP after individuals in the crop in 2019, and as far back as 2009.

A count of orchid rosettes was conducted, again on the 6th, in the small area of hay meadow management that has hosted a single flower spike until last year (see the April 2019 entry for how this increased to four!). We were utterly astonished this year however to count at least 35 plants. Not all will flower of course but it’s a huge increase and just goes to show what the right management can do at the right time in the right place.

Three Meadow Pipits were song-flighting in the top of the field on the 17th when there were still over one hundred mixed finches in the crop.

Because of the Corona Virus Pandemic the Barn Owl Trust office was closed on the 23rd March and most of our staff were furloughed. However during our permitted exercise walks we continued to see large flocks (120+) Linnets flying over the field. Primroses have been flowering in Corner Wood and on the slope beside it.

By the end of the first week there were subtle signs that the number of birds in the crop was beginning to decrease, with only about 400, mostly Linnets, recorded on the 7th. By the 21st there appeared to have been a clear-out as only about 60 birds were apparent, although that count may have been prejudiced by a male Sparrowhawk that spent much of the time making fly-pasts and sitting in a nearby Ash.

On the 19th a small group from Plymouth University students helped burn up the brash from the North Park hedge-laying.

A pair of Mallard was on the pond on the 21st as a Skylark flew overheard calling, both constituting first records for the LLP this year. 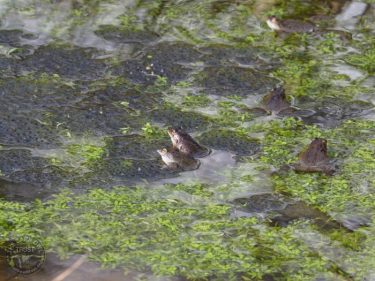 The first frogspawn was noted in the Oakley Pond underneath the Kingfisher Wall on the 8th, some 19 days earlier than the average date for the last 12 years.

The second Winter Bird Walk on the 9th was blessed with perfect weather for a change! In warm, dry, still, sunny conditions 16 interested visitors walked around the LLP, stopping at the bird crop to marvel at the sheer spectacle of the large finch flocks flying around. An estimated 500 Linnets, 50 Chaffinches, at least 10 Greenfinches, 5+ Goldfinches, 3 Reed Buntings, 20 Blackbirds, and several Dunnocks and Wrens were backwards and forwards in and out of the North Park hedge adjacent to the crop the whole time the group were there. In addition 2-3 Green Woodpeckers were heard yaffling up and down the valley, with Great Spotted Woodpecker and Nuthatch in adjacent woodland. There were also 5 Redwing and 6 Starling overhead, and 2 Red Admiral were on the wing in the Spring-like conditions.

Peak counts of 70-80 Chaffinches and over 30 Greenfinches were recorded in the bird crop on the 17th, along with 300+ Linnet, 3+ Reed Buntings (2 females, 1 male) and singles of Goldfinch, Robin and Blackbird, whilst a male Sparrowhawk kept the flocks busy.

After several postponed attempts due to the wet weather the first hedge-laying took place on the 22nd, when about 7 yards of the North Park hedge was laid.

As the month drew to a close there were at least 500 birds still frequenting the bird crop.