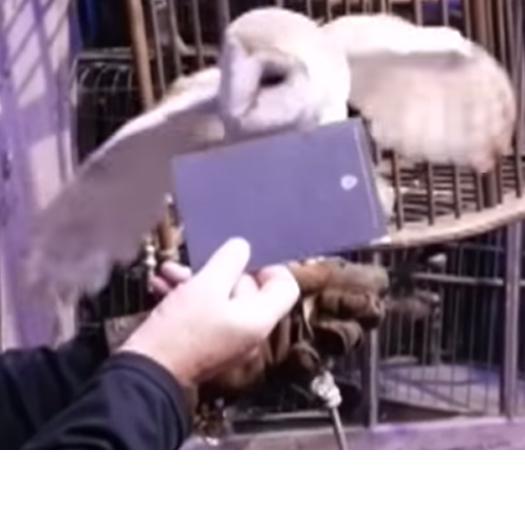 The Barn Owl Trust has written to Warner Bros. Studio Tour London – The Making of Harry Potter following the release of video footage captured by a PETA  investigator in February 2015.

The footage showed a tethered Barn Owl being reluctant to hold a booklet in its beak and the handler clearly saying “He did it 200 times yesterday”. The owl was repeatedly trying to fly off and was obviously distressed. Despite this people were being encouraged to stroke the bird which was then returned to a very small cage where it was unable to stretch it’s wings fully. The handler also said that the birds stay there all day……

JK Rowling the writer of the Harry Potter stories said : If anybody has been influenced by my books to think an owl would be happiest shut in a small cage and kept in a house, I would like to take this opportunity to say as forcefully as I can, “you are wrong”.

Warner Bros. response to us was as follows:

“Thank you for your email to Warner Bros. Studio Tour London – The Making of Harry Potter. Please find below our official statement, as requested:The owls that appeared in the Harry Potter film series occasionally come to the Studio Tour. They appear for short periods and are exclusively handled by the experts at Birds and Animals, the company that owns and trains them. We have asked them to review this matter. It essential to us all that the welfare of the birds and animals in their care is of the highest standard.I do hope that this has reassured you that the owls are not a permanent feature and we are reviewing this as an ongoing process.I would also like to take this opportunity to reassure you that no animals, including owls, are present at the Studio Tour. Kind regards,”

We responded with the following email:

“Thank you for your response. The welfare of the Barn Owl displayed on the Harry Potter Tour as shown in the PETA video is obviously not “of the highest standard”.Everyone can plainly see that the bird is distressed. It obviously does not want to be in that situation. It repeatedly tries to fly off whilst tied to the handler and when it is tied up in a tiny cage. Nobody who genuinely cares about the bird’s welfare would subject it to such an ordeal.Many of the people who have responded to our Facebook post have said that they will not be visiting the Harry Potter Tour because of this”.

We are waiting for a further response from Warner Bros.