You are here: Home › Uncovered: The killing of Britain’s Barn Owls
By BOT Editor on July 14, 2012 in Barn Owl Trust News 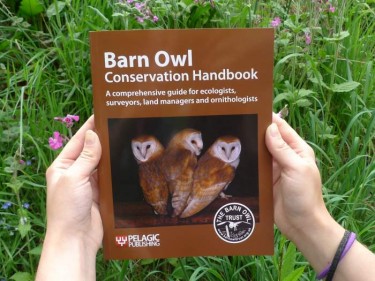 The first-ever Barn Owl Conservation Handbook, exposes the issues facing Britain’s Barn Owls and is a highly critical wake-up call for the Highways Agency, the rodenticide manufacturers and the Health and Safety Executives of Chemicals Regulation Directorate.

Barn Owls are stunningly beautiful and to see one hunting at dusk, is a magnificent sight. However most of the wild Barn Owls people see these days are dead on the roadside. If you’re really lucky and see a live Barn Owl the chances are that it will already be poisoned. Government research has shown that the vast majority of Britain’s Barn Owls contain highly toxic rat poison. Overall, the population has declined by at least 70% since the 1930’s and researchers have identified trunk roads and rat poisons as two of the most likely causes. 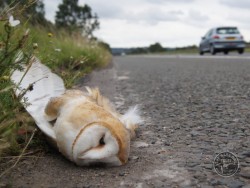 Before the first motorway was built, in 1959, roads accounted for only 6% of reported Barn Owl deaths but according to latest figures 50% of reported deaths are road casualties and the vast majority of these are found on Britain’s trunk road network – over 6,000 miles of mainly motorways and dual-carriageways. Each year, around 3,000 young Barn Owls (that’s about a third of all those that fledge) end up dead on the side of a major road. It used to be thought that the high number of juveniles dying on roads every autumn was unimportant because at that time of year so many young birds die of other causes. Research by the Barn Owl Trust has shown that most of the young Barn Owls killed on trunk roads are the ones that should have survived rather than those that were going to die anyway. Since 2003 the Trust has been asking the Highways Agency to implement recommendations aimed at reducing the annual death toll. Head of Conservation, David Ramsden MBE, commented, “We have been waiting for the Highways Agency to improve the design of road verges for nine years. They have singularly failed to take effective action. If we, as a society, cannot protect such an iconic ‘protected species’ as the Barn Owl, what hope is there for the rest of our native wildlife?” 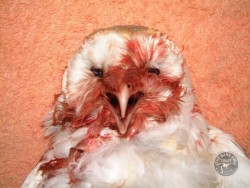 The situation with rat poison is an even greater cause of concern. Figures from the government’s own Predatory Bird Monitoring Scheme (2010) have shocked conservationists. A staggering 95% of dead Barn Owls submitted by members of the public (mainly road casualties) contain highly toxic anti-coagulant rodenticide poison. A minority are known to have died as a direct result of eating poisoned rodents but most carcasses contain a sub-lethal dose.

As the rodenticide industry is quick to point out, there is no evidence that sub-lethal doses have any effect on Barn Owls. But in fact, there is no evidence that it is NOT affecting them. Nest cameras such as those used by BBC Springwatch have revealed marked differences in the behaviour of breeding Barn Owls. Mr Ramsden said, “Some Barn Owls are far more energetic than others. We know that safe medicinal doses of the anti-coagulant Warfarin can have side effects in humans including nausea. The anti-coagulants found in Barn Owls are 100 to 1,000 times more acutely toxic than Warfarin and can cause lethargy. Even if behavioural changes are slight, with 76% of farms using highly toxic rodenticides and 95% of Barn Owls contaminated, the effect could be dramatic because almost the entire population is affected”.

“Most people who use rat poison have no idea about the risk to wildlife and pets; they think that bait-covering prevents Barn Owls being poisoned. In reality, no amount of bait covering makes the slightest difference because poisoned rats and mice take 3-14 days to die, during this time they carry the poison out into the open within their bodies and are then eaten by owls and other predators such as foxes and cats. This is termed secondary poisoning .

The Barn Owl Trust is hoping that the new Barn Owl Conservation Handbook, will raise awareness of both issues. “This is a wake-up call for the rodenticide industry, the Health and Safety Executive that licences pesticides, and the Highways Agency who have singularly failed to protect Barn Owls on our trunk roads. By December this year another 3,000 innocent young Barn Owls will die unless the Agency does something”.