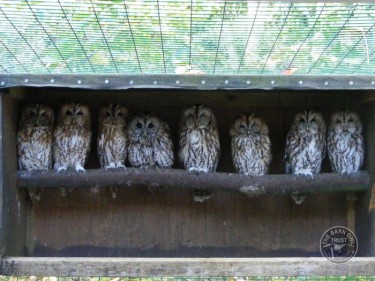 The aviary built by the Western Power Distribution (WPD) apprentices has just become the new home for 43 Tawny Owls and 2 Barn Owls.

The new residents came from the Three Owls Bird Sanctuary in Rochdale, which was forced to close earlier this year.

Nigel Fowler, a trustee of the sanctuary, was keen to keep the owls together as many of them have lived in the same social group for 30+ years.

When Nigel and the owls arrived, it was all hands on deck to get the birds into the aviary as quickly and calmly as possible. Even two of the neighbours came along to lend a helping hand.

All of the owls were given a quick health check and any birds with disabilities such as eyesight problems; were colour ringed so that we can identify them easily. The youngest owl is 19 and the two oldest owls are an amazing 35 and 34 years old, the same ages as our Assistant Conservation Officers Maxine and Stuart so we thought it fitting to name these owls after them. 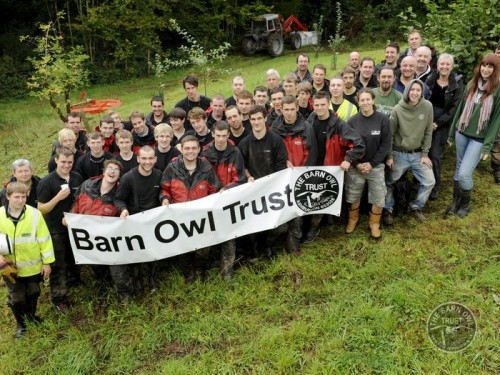 Along with the owls, “Three Owls” also donated two large chest freezers, 21 pet carriers, 10 stackable chairs and a donation to help the Trust look after the owls for the rest of their days.

The new arrivals have settled in well and seem quite content in their new home. David Ramsden said “It is very unusual for us to have so many owls living together and because they have been in captivity for many years they are very relaxed despite their new surroundings. It’s quite incredible to have 45 birds all staring at you at the same time, we are all very happy have them here”.