Published in February 2016 – the State Of The UK Barn Owl Population 2015 can be found on our website. 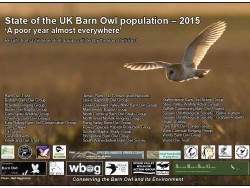 Overall, 2015 was a poor year for Barn Owls in the UK but with marked geographical variation. Our initial impression, that Barn Owls in the west had a good year and those in the east had a poor year, turned out to be unrepresentative.  In reality the results showed marked variation within regions and even within counties.

We are, as ever, very keen to acknowledge the huge amount of work carried out by independent Barn Owl groups, projects, and volunteers across the UK. We are particularly grateful to the 32 groups who provided their results for 2015. Between them, the contributors to this report monitored a staggering 5,963 potential nest sites and recorded 1,224 active nests. As well as providing a unique overview of breeding success in the previous year, this information underpins the huge amount of conservation work that is carried out, very often by the same people.

Surviving against the odds
The First Barn Owl Directory