The State of the UK Barn Owl Population 2016 report was published in February 2017 – more details here. 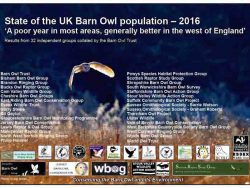 How did Barn Owls do in 2016?
Overall, 2016 was a rather poor year for Barn Owls in the UK but with marked geographical variation. A poor year in most areas but generally better in the west of England.

The data received from 32 monitoring schemes shows that the number of nesting pairs in the UK in 2016 was 6% below the all-years average and the average number of young in the nest was 7% below. Barn Owls had a poor to very poor year in South West and South England, Jersey, North Norfolk, parts of Lincolnshire and East Yorkshire, parts of Powys in Wales and West Galloway in Scotland.
Conversely, Barn Owls in the west of England (from Cheshire down to Buckinghamshire), and in North Northumberland, Suffolk, and the Isle of Wight had a quite good to a good year.