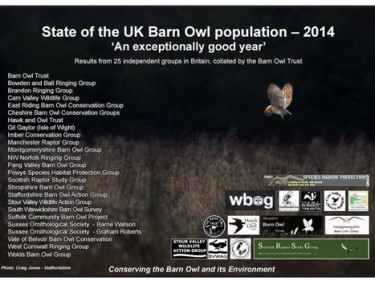 Published this week (Feb 2015) – the State Of The UK Barn Owl Population 2014 can now be found on our website.

Despite winter 13-14 being the stormiest and wettest for 250 years, it was mild and therefore quite a good one for Barn Owls (except where long term flooding was an issue). An early spring was followed by a long and pleasant summer. Indeed, September 2014 was the driest since records began. According to the National Climatic Data Centre, 2014 was the warmest year on record which was largely attributable to sea temperatures.

Annual variations in small mammal abundance are not linked to winter weather (Taylor 1994) so it was a fortunate coincidence that a year of great weather happened to coincide with a peak year for small mammals. The result: Barn Owls had a very productive year in many areas. 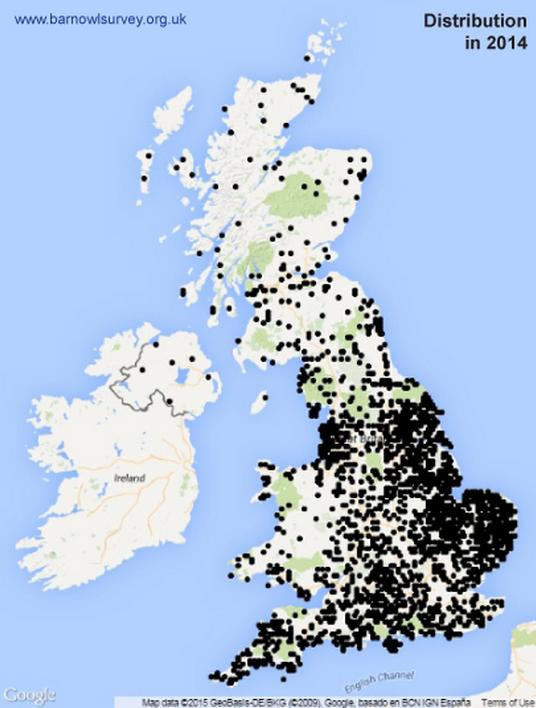 Although not every ‘dependable’ nest site was occupied (probably due to high mortality in 2013), many groups were surprised to find so many pairs nesting. Overall, UK nesting occupancy in 2014 was 16% above the all-years average. An overall UK brood size increase of 35% is a tremendous short-term gain.

The map  shows UK Barn Owl distribution based on 3,488 records provided by the public to the UK On-line Barn Owl Survey – www.barnowlsurvey.org.uk comprising 2,489 sightings and 999 roost/nest sites occupied in 2014.