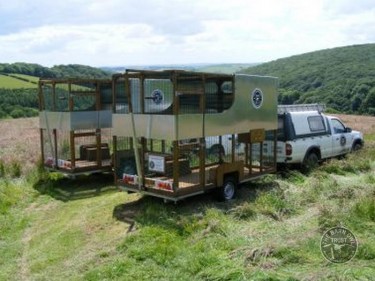 Two new mobile release aviaries are about to go into service for the Barn Owl Trust. Originally a ‘whacky idea’ by Head of Conservation, David Ramsden MBE, the unusual looking contraptions were pioneered by the Trust and have since become a vital piece of equipment for the rehabilitation and release of Barn Owls back into the wild.

49% of the injured owls received by the Trust recover well enough to be released. As David explained “it’s much better to take the owl back to the area it came from and far better to release it from an aviary than taking it out and just letting it go. Using a mobile aviary allows us to use the best release method in the best place for each individual owl. The aviary is towed close to the site where the owl was found and parked up. The owl is then placed inside for about two weeks before the roof is opened up, allowing the bird to fly in and out. Once the owl stops returning for food the aviary is towed to the next release site. People love getting involved”, said David, “we have no end of volunteers who’d love to have a Barn Owl released on their land”.

The two new mobile aviaries supersede the original version built in1997 and include significant design improvements and modifications. Galvanised steel panels provide areas of protection from the elements and prevent other animals such as cats and squirrels entering the aviary and stealing the owl’s food. The chasis for the two new mobile aviaries were supplied in kit form by Alko. The first was built with help from a representative from Alko who travelled to Devon from the Midlands. The second was built entirely by the Barn Owl Trust and David drew upon his experiences of using the original mobile aviary to create plans for the the new improved design. Construction was undertaken entirely in-house by the Barn Owl Trust.

One of the new release aviaries was completely funded by the William and Patricia Venton Charitable Trust, and grants from the Marjorie Coote Charitable Trust and the Valerie White Memorial Trust helped towards the cost of the second one.