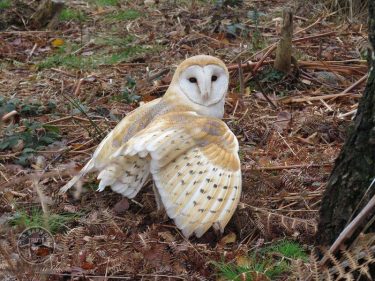 On 22nd November 2018 wildlife artist John Walters found a ringed Barn Owl whilst out for a walk on Chudleigh Knighton Heath in south Devon. The bird was alive but too weak to fly. After taking a quick photo (right), John picked her up and brought her to the Barn Owl Trust. She weighed just 204 grams, two-thirds of the weight she should have been. At this weight most starving Barn Owls are already dead. After 48hrs of re-hydration and hand feeding she starting eating voluntarily. On day 9 she was moved into a large Release Aviary and by day 11 her weight was back up to 322g although her flight was a little lop-sided suggesting a minor wing injury.

Meanwhile, her ring number revealed that she had been ringed by Craig Bell as a nesting near Bury, Greater Manchester and had dispersed about 400km. Although this is by no means close to the species UK long-distance record of 624km it is nonetheless very unusual.

By New Years Day she was ready for release. The aviary top was opened up but she didn’t fly out! The following evening she did as you can see in the video below.