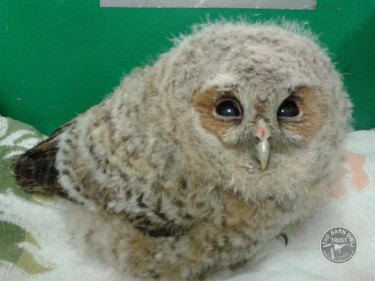 He arrived at the Trust at the end of February and is around 6 weeks old which means he hatched in mid-January!

He is one of the earliest owlets in the year ever recorded as most Tawnies don’t even lay their eggs until mid-March. He was found near Dartmoor prison hence our admin team have christened him Porridge.

Porridge is now flying and feeding well so is in an aviary with ‘Steve’, another celebrity Tawny Owl to ensure that he doesn’t get too attached to people and knows that he’s a Tawny Owl. He will be released later in the year.

StEve the Tawny Owl – Update
Welcome to our new website