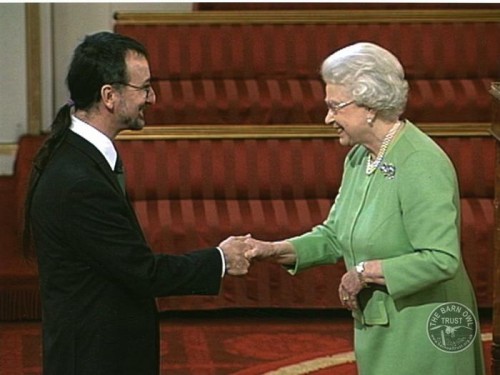 On Tuesday 11th December 2007 the Queen presented David Ramsden, Head of Conservation with an MBE for services to the Barn Owl Trust. The investiture ceremony took place in the Ballroom at Buckingham Palace.

David is Head of Conservation at the Barn Owl Trust, a national conservation charity, based just outside Ashburton in Devon that he co-founded in1987, Since its inception, nearly twenty years ago, the Trust has carried out ground-breaking research into Barn Owl conservation, led by David. The Trust is renowned for its practical work and information service and has become recognised both nationally and internationally.

David was nominated for the MBE award by Mike and Heather Ross from North Devon; they first met in 1995 when he visited their Barn Owl site. David received news of the award in the Queen’s Birthday Honours list published in June and his was the only MBE to be awarded for services to wildlife.

Talking about the MBE award David said, “I haven’t really had time to stop and think about it as I have been speaking at the World Owl Conference in Holland and returned a few days ago to run the Trust’s ‘Barn Owl Ecology, Survey and Signs’ training course (BOESS). I feel extremely honoured to have been considered for an MBE and I am keen to accept the award on behalf of everyone who helped to create the Barn Owl Trust, all those who helped in its achievements, and especially my partner Frances Jaine who was also fundamental in helping to set up the Trust.”