Barn Owls are birds of prey or raptors – specialised hunters at the top of the food chain, which means that they need to eat prey animals to survive.

Plants get their energy from the sun, and from rain water, air and soil.

This sequence of living things, each depending upon the other for food, is called a food chain and is part of a much more complex food web.

What do Barn Owls eat?

Barn Owls are found in many countries around the world, where they eat a variety of small animals.

What does a Barn Owl’s prey eat? 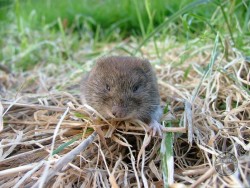 Shrews are small predators and eat worms, beetles and insects (which eat dead leaves and plants)

Rats often eat grain from farmer’s barns. Cereals such as wheat and barley are grown by the farmer to feed people or animals.

How do plants get their food?

Plants absorb some of their food through their roots, which may come from decayed plants and animals in the soil. Green plants produce food in their leaves, by using sunlight in a chemical reaction called photosynthesis. Sun, rain and soil are the basic sources of energy for the growth of plants, and are nearly always at the start of a food chain.

Does anything eat Barn Owls? 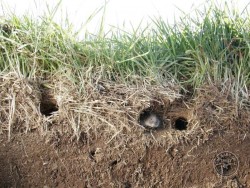 Barn Owls do not have many enemies in the UK – but sometimes they are prey for another predator. Buzzards and goshawks have been known to eat Barn Owls – and a hungry fox will get lucky now & then. Very young, sick or injured owls are more likely to get eaten by a predator. A fallen owlet in a barn is in danger from farmyard cats – if it is healthy it needs to be put back in its nest as soon as possible.

The predators are controlled by the prey!

You might think that if there are lots of predators (hawks and foxes as well as owls) eating small mammals, then there will be fewer small mammals – but actually it’s the other way round – if there are fewer voles (e.g. if there’s not enough food, or places for voles to live), then there are fewer Barn Owls. People can help by making sure that there is plenty of the right sort of rough grassland for Field Voles to live in.