The Barn Owl Trust webcams are no longer available. 😥

And now for some bad news…..

After 11 years of (largely successful) streaming of Nestcam and Barncam, the site we’ve been using in Cornwall is to become unavailable due to circumstances beyond our control. We thought it wiser to pull the cameras now whilst the birds are only there occasionally than to wait until later on when there’s a greater chance of more activity. The nestbox will of course remain and we hope the birds continue to use it in the future.

We’re extremely grateful to Yvonne at the farm, whose continued support over the years has made all of this possible, and to Colin at WildlifeTV, who has paid for all the streaming since we started in 2008, and also supplied much of the hardware. WildlifeTV will continue to stream his other cameras as normal. We’re also grateful to those of you who have watched over the years, sent us updates and concerns and been so positive about the whole experience. For those concerned about getting withdrawal symptoms, our Barn Owl webcams page does have links to other Barn Owl nest cameras.

5th – the pair has been roosting together over the weekend. On Friday, and again on Sunday there were reports of attempted copulation. At the very least this suggests that both birds are in good condition, which has got to be a good thing for this time of year.

1st – after nearly a week of only a single bird, there is a pair in the barn this morning; one at roost in the nestbox, the other sitting on the tray outside.

22nd – the pair is viewable today via the cams; one is at roost in the box, the other on the tray. 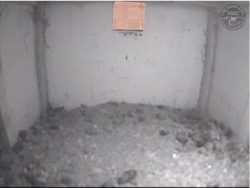 8th – in a miraculous stroke of genius, Paul (Colin’s tech guy) somehow managed to sort out the streaming, so everyone should now be able to see both Nestcam and Barncam via Chrome and Firefox. Thank you both, much appreciated. If you could now make sure the pair spend all their time in the nestbox from now on that would be most agreeable…..

30th – well, that didn’t last long! A brief flurry of snow overnight along with some sub-zero temperatures appears to have resulted in nothing in the barn today, although the pair was in there yesterday briefly.

23rd – still the odd sighting of a single bird gracing the barn these days, but much less activity since the temperature dropped a week or so ago. We seem to be missing the worst of the really cold temperatures down here in the south west and haven’t had any appreciable snow as yet – long may it continue!

8th – quite a lot of activity has been reported over the festive break, with the pair frequently roosting together in the nestbox. There has also been some mutual preening and even a cached food item, which was seen to be eaten by the presumed female. It’s been largely mild and still in recent weeks so we’re hoping the birds are in really good condition, ready for the spring.

No Reduction in Barn Owl Contamination
Releasing a Barn Owl – a great way to start the year!

How to encourage wild Barn Owls