You are here: Home › How to manage land for Barn Owls › Bracken management in rough grassland 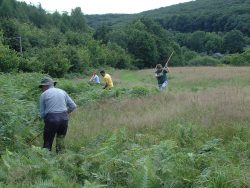 Bracken bashing is an essential management regime for various types of habitat, particularly rough grassland. The aim is to reduce the vigour of bracken, which if left unchecked would smother other flora beneath it.  Without management, grass growth would be suppressed resulting in a decline in grassland species, including small mammals such as Field Voles.

The technique is quite simple. With an old broom handle the base of the bracken stem is sufficiently bruised to fold the plant over. The rhizome continues to exude sap, thereby weakening the plant. Bracken growth the following year is consequently much less vigorous, allowing competition from other flora.

If we didn’t bash the bracken with broomsticks we would have to adopt another method of control.  Alternative methods include; 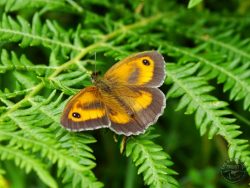 In conclusion, we prefer to bash some of the bracken on-site manually because we consider it to be the least impactful on wildlife of the management control methods available. Just as importantly we don’t control all the bracken everywhere as we know that, as a habitat, bracken can be really good for a small number of species. Tolerating an appropriate amount of bracken cover can help to maximise the diversity of a site. If considering bracken control on your own site, it is advisable to determine the range of species present and evaluate their needs before deciding on the best course of action.

How to manage land for Barn Owls
How much land do Barn Owls need?