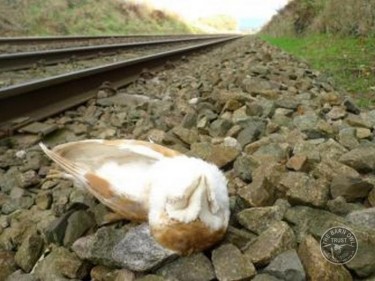 The Government plans to build a high speed rail line known as High Speed 2 (HS2) linking a number of the UK’s major cities. Due to concerns over its impact on Barn Owls and the local environment, we submitted comments on the ecological content of the HS2 Draft Environmental Statement (ES) and associated documents.

1. The Barn Owl Trust fully supports the comments by the HS2 Ecology Technical Group on the ecological content of the HS2 Draft Environmental Statement and associated documents. In particular; a) that more time should be allocated for a proper assessment of both the short and long-term impacts on habitats and species, and b) the full Environmental Statement must set out exactly how the project will achieve net gains for biodiversity including Barn Owls.

2. The draft ES does not adequately address the issue of the probable effects of HS2 on Barn Owls.

3. The scope of the stated impact on Barn Owls, the terminology used, and other inadequacies (draft ES 7.5.8-13) indicate the author’s lack of relevant knowledge.

4. In considering only the impact on nesting sites within 1.5km of the route, the draft ES is clearly inadequate. Specifically, the long-term impact of increased annual mortality of dispersing juvenile Barn Owls is not mentioned.

5. The draft ES does not include any measures aimed at preventing owl-train collisions.

6. The idea that the provision of nest boxes over 1.5 km from the route can effectively mitigate the impact of HS2 on Barn Owls (“offset the adverse effect”) is ill-founded. Specifically, the statement “if the proposed mitigation measures for barn owl are implemented through liaison with landowners, the residual effect on barn owl would be reduced to a level that is not significant” is not true.

We and groups like the Woodland Trust, believe there is a need to move towards a low carbon economy. However, we are yet to be convinced that this proposed rail route by the Government, as an alternative to road transport, is as green as it claims to be.

Lucky to be Alive
Christmas gifts from the BOT