How the poisons kill 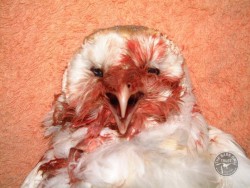 Most rodenticides are anti-coagulants. They prevent the blood from clotting and thin it until the victim eventually dies from internal bleeding. The time taken for a rodent to die after eating the bait varies from 2 to 12 days. A rodent eating a sub-lethal dose (not enough to kill it) may carry the poison in its liver for several months. Before a poisoned rodent dies it may be caught by a Barn Owl which then ingests the poison. This is called secondary poisoning. Creatures which have been killed by secondary poisoning include Barn Owls, Tawny Owls, Red Kites and Foxes. Animals which have been killed by directly eating rodenticide baits include dogs, cats, pigeons and blackbirds.

Research has shown that poisoned Barn Owls either die slowly, or survive and carry a residue of poison in their bodies. Typically it takes 6 to 17 days for a Barn Owl to die after eating 3 mice containing the poison Brodifacoum. Unfortunately no research has been carried out on the effects of sub-lethal doses on wild Barn Owls. There is a concern that it may affect survival during hard times and breeding success.

Levels of SGARs in Barn Owls

Monitoring of Barn Owl carcasses has shown an increase in secondary poisoning; the percentage of carcasses containing residues of second-generation rodenticides increased from 5% in 1983-4 to 53% in 2003 (Predatory Bird Monitoring Scheme). In 2006 a new, more sensitive method of analysis was used. This revealed that 63% of the Barn Owls examined had traces of second-generation poison in their livers. Had the old method been used, the poison would have been detected in 39%. While this shows that levels of poisoning have gone down since the high of 2003, it also suggests that previous levels have been significantly underestimated. What the 2003 figure would have been, had the new method been available then, can only be guessed at. The figure for 2010, again using the newer method, stands at 91%. The latest figure (from 2019) is 87%.

Rodenticides almost certainly have a detrimental effect on Barn Owl populations in the UK and this is an issue of serious concern for Barn Owl conservation.

What’s the difference between First Generation and Second Generation?

SGARs were introduced because rats in some parts of the UK became resistant to first generation products (FGARs). Some rats were eating it, surviving, and then producing young that were also resistant. Some rat populations are now resistant to the earliest SGARs Difenacoum and Bromadiolone. Ever-increasing resistance is a huge problem. It is accelerated by the over-use of poison (e.g. permanent baiting) and the widespread use of  poisons that are stronger than needed. Ideally, SGARs would only be used in areas where rats had developed resistance to FGARs. However, once a poison is authorised for use, the licencing authority (HSE) has no control over where it is used. At least 76% of farms across the UK use SGARs. 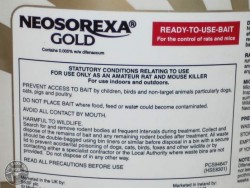 All rodenticides are toxic and can kill Barn Owls; however the instructions provided on the containers do not mention the risks of secondary poisoning, or explain how it happens. Labelling generally gives the impression that, provided baits are kept covered and dead rodents disposed of, there is little or no risk to predatory birds. Unfortunately no amount of bait covering will prevent secondary poisoning and research has shown that the instruction to search for and dispose of dead rats is ignored by 98% of users.