You are here: Home › Hal the Tawny Owl – From Rescue to Release
By botshop on September 20, 2016 in News Archive

On the 14th June, we received a Tawny owlet from Southmoor vets. He was found in a field by a hedge near Halwell by a member of the public who took it to the vets for fear of its safety. On arrival, he was around 5 weeks old, weighing 285g and quickly got the nickname ‘Hal’. Tawny owlets are often found on the floor, they go through a phase called ‘branching’ where they are often out of the nest well before they can fly. Our advice to people finding young Tawny Owls is to leave them where they are or put them back in a tree as this is often the best course of action for this species. The young call a lot and are usually found and fed by their parents until they learn to find food for themselves. 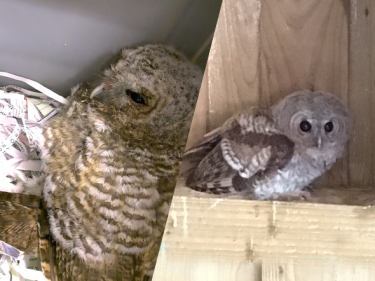 Hal settled in to life at the Barn Owl Trust well and began feeding on his own and was soon moved from a box in our bird room to a small rehabilitation aviary, where he had plenty of room to begin exercising his wings and learning to fly.

On the 2nd August, Hal was moved to our static release aviary to practice his flying a bit more. He was regularly seen roosting at the back of the aviary. 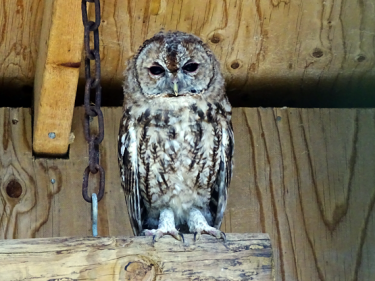 For a while Hal had a companion in the form of a rescued Barn Owl who was undergoing rehabilitation at the same time. Gradually, Hal lost his nestling fluff and began to look like an adult Tawny Owl. Despite this, he still retained his ‘fluffy trousers’!

On the 5th September 2016, Hal, a now ringed fully grown Tawny Owl was released from our static aviary. This release is known as a supported release, meaning that once the bird is released into the wild, we still provide food for it in case it is struggling. Once the food is no longer being taken, we will stop providing it. 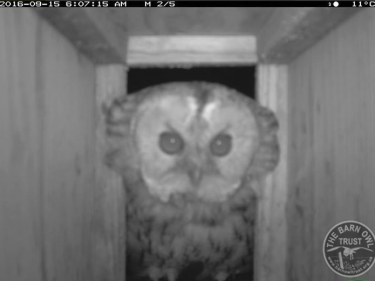 Curious as to whether the food in our release aviary was being taken by Hal or a different bird, we set up our trail camera and managed to capture a picture that showed Hal was the owl visiting the open release aviary during the night and taking the food.

This is a success story for Hal, but young Tawny Owls are often best left with their parents if you find one, but first you must check it over for signs of injury.  You can read here about what to do if you find a young Tawny Owl.