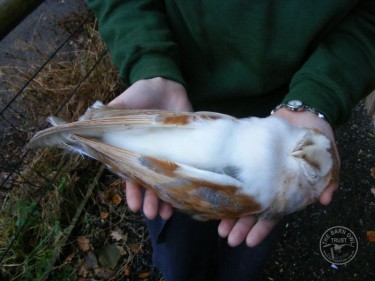 “The worst Barn Owl breeding season for over thirty years” is how 2013 is being described by conservationists throughout the UK and beyond. Voted Britain’s most popular farmland bird, this icon of the countryside is now in very serious trouble.

A run of extreme weather events since 2009 has devastated not only people and property but Barn Owls and other wildlife. The final blow was March 2013. “Barn Owl mortality usually peaks in February and then things improve” said Barn Owl Trust spokesperson David Ramden MBE, “but in March this year mortality just kept increasing and by the end of the month huge numbers were dead”. At a time when Barn Owls should have been thinking of breeding the British Trust for Ornithology recorded a 280% increase in reports of dead birds many of which had starved.

Numbers were already low due to the bitterly cold winters of 2009/10 and 2010/11 and the extremely wet ‘English summers’ of 2010 and 2011. “In 2012 our hopes were high” says David. “Fantastic summer weather in March 2012 meant that the owls started breeding earlier and by late May we were finding nests with as many as seven well-grown owlets. Then in June it all went horribly wrong. The rain started and just didn’t stop. This prevented the adults hunting and many young birds starved. In some cases, we found entire broods of beautiful owlets dead in the nest”.

This year’s round of 73 Annual Monitoring Site visits by the Barn Owl Trust has now revealed the extent of the devastation. On average nesting occurs at 51% of sites, this year’s figure is a mere 12% and 47% of nest sites are completely unoccupied. At the 12% of sites where pairs have managed to survive and breed, the average number of young in the nest is just two rather than the four or five that are needed for population recovery. Britain’s biggest regular Barn Owl survey carried out every ten years in Devon is checking 1,234 sites this year. Out of 276 sites checked so far, Barn Owls are nesting at just 7. Of these seven, only four have young in the box and two have abandoned their eggs.

Figures from independent Barn Owl Groups around the country are all painting a similar picture. The Shropshire Barn Owl Group has 120 sites where they usually have 36 nests, this year they have found only 4. The West Sussex group has 90 sites that normally have up to 55 nests, this year there are only 5. And it’s not only the UK that is affected. Dr Akos Klein from the Hungarian Barn Owl Foundation has found similar results, “Out of 30 regular nest sites we found one active nest and one solitary bird. This is pretty much the case all over Hungary. Our March was like January.”

A hundred years ago the Barn Owl was a common farmland bird, if this year is anything to go by this beautiful bird is now far more scarce than it was in the 1980’s when it was estimated to have declined by 70% since 1932.

How you can help

If you see a Barn Owl dead or alive you can record your sighting on-line at www.barnowlsurvey.org.uk

Find out more about Barn Owls by exploring our website

Make a donation to support our work

SGARs (Rat Poison) and Barn Owls
Lucky to be Alive