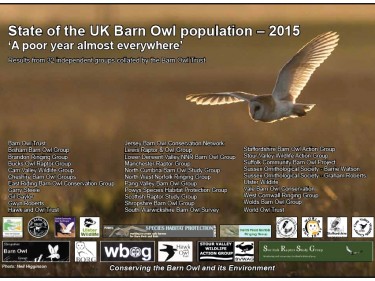 2015 was a great year for Barn Owl monitoring although, overall, it was not a great year for Barn Owls. Almost 6,000 potential nest sites were visited by licensed Barn Owl workers who contributed their results to the new report – State of the UK Barn Owl Population 2015. 1,224 active nests were recorded which is 26% lower than the all-years average. Similarly the number of young found in nests was a disappointing 18% below the all-years average.
The general consensus was that the poor results were due to lack of food rather than poor weather and several contributors reported finding adult pairs that were ‘taking a year off’ from breeding. On a more positive note, Barn Owls in West Cornwall had a really good year! Here’s How to encourage wild Barn Owls.