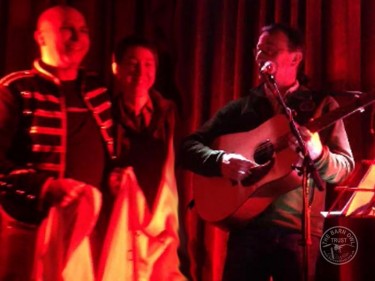 On 20th March 2014 The Choir of Loretta, (aka Steve Nisbet) played a benefit gig at The Barrel House in Totnes, Devon to raise funds for the Barn Owl Trust as part of his ‘100 gigs for 100 causes’ tour. He was supported by the Trust’s two singer songwriter’s Owly Dave & Jasmin Ramsden. The event was organised by ‘Friend of the Trust’ Trudy Turrell and raised a wonderful £156.37 exceeding Steve’s target of £100 for each of his ‘good causes’. For those that couldn’t make it on the night we have links to two songs from each of the artists.

The Choir of Loretta, (aka Steve Nisbet)

Steve Nisbet) has been singing, playing and writing music in various us guises for over a quarter of a century. A multi-instrumentalist, he’s played in a multitude of bands covering every conceivable style of music, and has been involved in numerous charitable projects over the years. He is taking his eclectic mix of acoustic songs to all corners of the British Isles in a challenge to raise funds for charities local to each gig. Steve played cover versions spanning disco, rock and pop, and was Master of Ceremonies for the evening. Find out more about his ‘100 gigs for 100 causes’ tour.

Marlene On The Wall – Suzanne Vega

Jasmin has a ‘unique and haunting voice’ and performs her own songs. As you’ll hear, her distinctive style captivates even a noisy crowd. She produced her first EP, ‘Echoes’ in 2013. She works part-time for the Trust as our handy-man and builds our nestboxes. To hear more, search for Jasmin Ramsden’ on YouTube.

Gone so long – Jasmin Ramsden – First live performance of this song written the day before!

Dave busked the Paris Metro for 3 years in the late 70’s playing mainly Donovan and Dylan songs. These days he mainly plays his own songs with occasional public performances close to home. On the night, Dave played two of the eighteen songs he wrote last year. David is Senior Conservation Officer at the Trust. To hear more, check out Owly Dave’s own website.